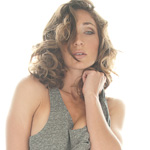 You know when you go to see Cirque du Soleil and a performer is floating effortlessly with only fabric to support them? Yeah, that’s Genevieve. She’s an aerialist, but you’re just as likely to see her suspended by silk high in the air as you are to see her lounging on a beach. “Swimming in waterfalls and rolling around in the sand is definitely food for my soul,” she says.

Raised in California, she has a long list of commercials and fashion spreads to her credit. She’s also an actress, appearing in the brutal remake of the ’80s horror film Maniac, which debuted to great reviews at the Cannes Film Festival. You might also remember her as the swimmer who meets a grisly end (via propeller) in Piranha 3D. Genevieve is also set to appear as Miss Klein in Push Play.

That’s coming soon, but until then, check out her amazing photos and hear about Genevieve in her own words below!